Basically, I want to end the “identity crisis” for sf, as Im tired of dealing with the primary clone morph for sf, as it doesnt distinguish between gar sf and immigrant sf. Kinda enable immigrant to literally ‘disguise’ as gar( despite not having gar tag) and ambush us. It doesnt make sense for clone morph sf to be used on immigrant, so I suggest a sf morph inspired from seperatist special forces for immigrant. This way, gar sf will at least be distinguishable from immigrant sf.

( Detailed description of the suggestion / feedback ) 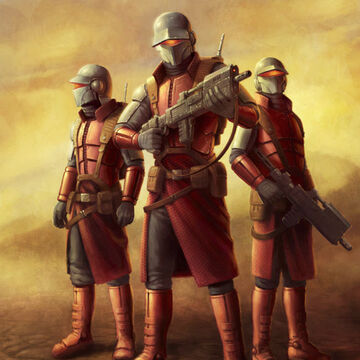 Nice idea for sure yeah

I say it helps with the confusion.

This would be so much easier, great ideea!

Special forcss can still have gar morph. What im saying is requesting the dev to somehow is make sf into two segment:
Gar sf with clone morph and immigrant sf with seperatist morph.

Yeah, this is what I mean.

Nice idea, however, thats raises the issue of enemy soldiers entering friendly territory, which makes no sense. But at the very least, immigrant sf should be tagged as immigrants, not sf. Also, gar sf should get tk punishments, same as any others, since they arent part of an official division and arent held accountable by anyone.

Another idea would be to stop selling sf and make it into an actual division, and give a rebate to all the people who purchased the sf outfit, by replacing it with the separatist sf, and also a friendly morph, that can replace the current sf, but still be used for similar purposes. It just doesnt make sense that you can buy a rank though. They could get some kind of pirate morph instead, which they can be friendly or raid with.

There no need to do that just give the immigrant sf an separate, seperatist morph. Like i said, immigrant sf should have their own morph, not the clone morph used on gar sf. Gar sf still subjected to normal gar authority, so they already have tk warning and same punishments.
Sf will be divided into two morphs given:
One for immigrant sf
One for gar sf.
Sf shouldnt be a raider morph. It can be divided into two sf morph.

Like i said, it makes literally no sense to have soldiers from the enemy side coming to your border as immigrants. Saying youre a confederate gets you killed at the booth

Well the game said otherwise. Raiders are allowed to pass throgh us. I mean… have you not seen them flying through the fences? But still, we gar not allowed to kill them unless they decided to be butt hole and point their guns at us.

I like the idea, but I rather have the old morph for SF back for GAR. This new morph is litterly a trooper morph with a random helmet ontop of it. I really hate it and I’d rather have both GAR and non GAR have different morphs than the GAR one with clone armor.

Immigrant SF’s shouldn’t be tagged as Immigrants. It doesn’t matter if they are in GAR or not, they are still a part of GAR so having seperatist morphs wouldn’t make any sense as SF are GAR.

Bro do you not know the difference or something? Immigrant SF spawn on immigrant spawnpoint, and yet you call them to be part of gar? Immigrant SF are not part of Gar. You are only gar if you have gar tag by joining the gar group. Being SF as an immigrant does not make you gar.
That why Im calling this a identity crisis, and I ideally want split SF into two segmented of morph with two affliation.

Hence,
Gar SF with clone special forces morph
While immigrant sf with seperatist special forces morph.
Seperatist, Gar’s enemy, obviously have their own army, hence that why they also have sf.
Immigrant sf should be having the sf tag above their tag, like gar sf, but with different color, like orange or other colors instead of gray, which is the colour for it currently.

Might be a little late to this, but this is a great idea. Would get rid of all the confusion and make raiders verses GAR more distinct.