One of the most underappreciate clone divisions in the star wars universe is the 21st Nova Corps, otherwise known as the Galactic Marines. Known for their unique armor designs and their infamous campaign on Mygeeto, the 21st Nova Corps would be the perfect fit for the next division of our grand army. In this forum post, I will detail my vision of the new Galactic Marines.

The 21st, for now, will have 1 company besides the base soldiers of the legion.

-The Galactic Marines are the main force of the 21st Nova Corps. Characterized as relentless in combat, they are specifically trained to fight in the harshest conditions the galaxy can throw at them.

-Shiver Battalion is the 21st’s scrim team, lead by Captain Colo. They are the highest rank of combatants within the Galactic Marines, and specialize in stealth and guerilla tactics. They wear this honor proudly.

To join the Galactic Marines, you must be a rank of specialist or higher in the Grand Army, and display incredible discipline and ability in a recruitment tryout.

I hope that you will think about allowing this division idea to be made into a reality. The 21st are a personal favorite of mine and I would love to see what we can make of it! 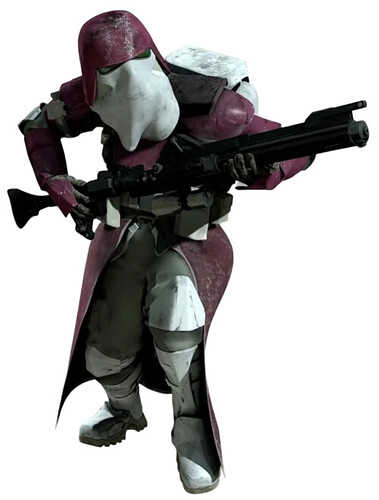 the scrim team isn’t usually a company, so maybe add some different ones

Thank you, I will come up with some. I did not know that before hand.

Cool idea, unfortunately they’re not planning on adding any more divisions until all of the other ones have been reworked to be more unique.

Very cool, but maybe there could be some more companys like a guarding and support one.

That’s the old Special Forces morph, so they wouldn’t have to worry about a new morph which is cool

i think thats only for Bacara

Bacara is actually the one that doesn’t use the morph.

He stands out quite a lot compared to his men.

Yes, that’s because I was talking to the man who mentioned the old Special Forces morph.

21st is already planned, as I listed here: Everything planned for the revamp! Part-2