Guards buff for guards (I do not know a title.)

It would make sense, because Commander fox (CG HICOM) took around 5 bullets before he really died.

Also it would be really useful because riot is a guarding company we can get fortified passive ability.

I know riot has shields but this suggestion is about guarding companies.

I, personally think that this is a rather good update. Maybe lower the percentage a little but it would definitely make sense lore-wise.

I think you meant damage reducttion.

I thought this was some rando who couldn’t spell when I saw the title.

No, they already have a really OP riot shield. They don’t need dmg resistance. Other guarding companies will likely get something at some point as well.
If you can’t protect your VIP than it’s kind of just a you issue.

I agree with that, It will be cool.

Bro, CG already has enough buffs, from cuffs to Riot shields to being the most popular division. Y’all’ don’t need anything rn until other divisions have been given their perks.

The shield is mid, take from a former riot and patrol ending raider.

oh yeah, mid an extra health bar that can replenish itself quickly if removed.

he means the riot shield

oh, but it isn’t that mid, it can block shotgun, and super blaster, it’s just inconvenient to use.

It does protect only 20% of the person and when you use jetpack or double jump it kind of becomes useless.

These guys for real want more buffs to GAR. I may not have been in game a lot but I’m pretty sure there is never more raiders than divisionals as of now. There is no way that you guys can’t handle anything already with what you have currently just waiting for them to become AOS

OP? It only protects at the front. You can easly hit us from above, under, left, right, back. If you suck at raiding that’s a you problem. Shields aren’t OP.

We don’t even get forcefields… There is a huge difference between a bullet proof shield, you can hit from litterly EVERY direction expect the front and a huge forcefield bubble that gives you extra HP.

I’m not even a raider, besides if you need damage resistance to defend your VIP well then that’s a YOU issue.

No… We are guards. We need to make sure the VIP is alive at all times. If you look at raiders right now, you would see that almost every single one of them is packed with gamepasses and always uses alter + lightsabers.

I thought you were talking about RG, if you actually read and scrolled up you would know. 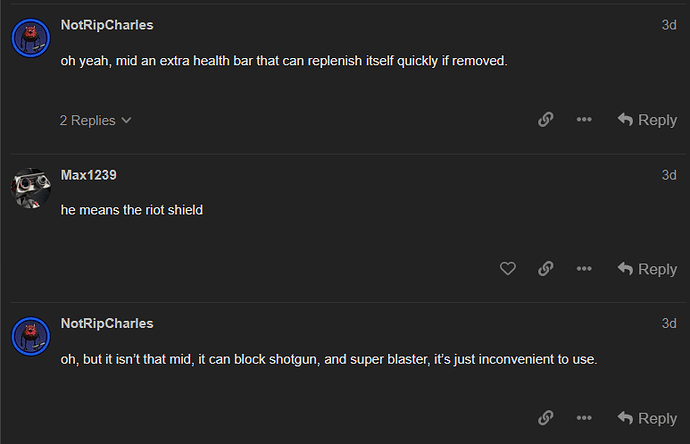