As we all know, the arms dealer in Coruscant sells weapons to anyone who has the means to do so, whether it be through credits or robux. But recently, it was come to my attention that the arms dealer has been put in jail! He was put in jail for allegedly “committing tax fraud”! By the Coruscant Guard nonetheless! 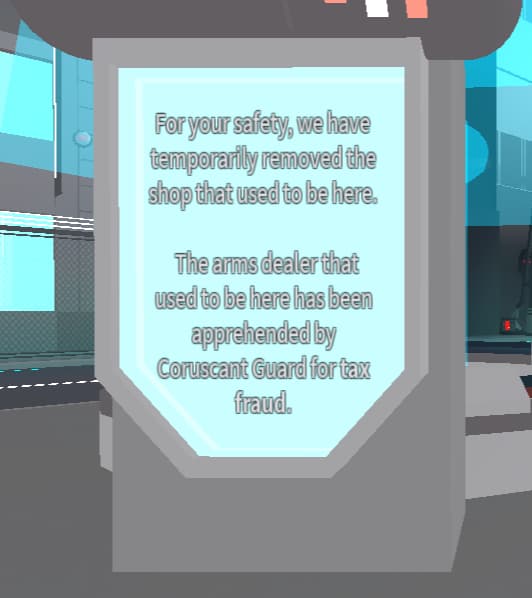 But, the thing is, he never committed tax fraud! How do I know this, you ask? Well, why would such a good man that sells guns to anyone commit tax fraud? He had no reason to, so therefore he obviously didn’t do it. Rumor has it, his mother handles all of his taxes so shouldn’t she be the one in jail? I miss you arms dealer… My beloved arms dealer… Even if he did allegedly commit tax fraud, he never got a fair trial! Please, free my love. My beloved arms dealer.

At the raider base it says that he was arrested for illegally distributing weapons.

Wow, first framed for tax evasion and now illegally distributing weapons? They really want that man gone… Such a shame…

Well he was a clone trooper who was selling illegal weapons to separatists. I think CG did the right move.