So I’m raiding off duty to grind for some credits like most people do when an afk farmer that of which I do not have his username joins the game. I was robbing the bank and I thought he was going to stop me. I have no weapons so I am unarmed robbing the bank that of which he could of stopped me. He doesn’t move since I position the mini map to see the FOB spawn. A different high rank joins the game as soon as I finish the robbery. I tell him about the afk farmer and he goes over there and the rest I couldn’t see since I wasn’t in the group so I couldn’t go over there. He leaves the game soon after that and it’s me and the afk farmer still. I begin another robbery just as the sergeant major joins (Pistoffr) so he’s sitting there in the border spawn also doing nothing. The afk farmer dies for some reason probably due to inactivity. They are both at the border spawn doing nothing standing right there. So I finish the robbery and go over there to see them both afk farming. Pistoffr notices me and starts to move around as if he wasn’t afk farming. So I go in the spawn and ask him why he was afk farming. His response was “Well you were robbing the bank”. I then ask him if afk farming is worse than robbing. He says afk farming is ok since it’s in spawn and it’s a dead server.(which it was and was why I was robbing the bank) soon a staff sergeant joins the game and heads to a booth and there I ask him if afk farming at spawn was ok and he replies with no. He goes and tells me he will kill the afk player but he can only do it once. Pistoffr walks into the booth and is just standing there watching the conversation. The staff sergeant leaves and I tell Pistoffr that he just allowed afk farming and was also doing it himself too. I then tell him that he basically allowed afk farming and he responds with I don’t care and leaves the game shortly after that. I don’t know about you but even though I was robbing the bank which is also bad but he was a high rank which should of meant he would of reported the guy or even try to stop him and maybe get someone to handle him. 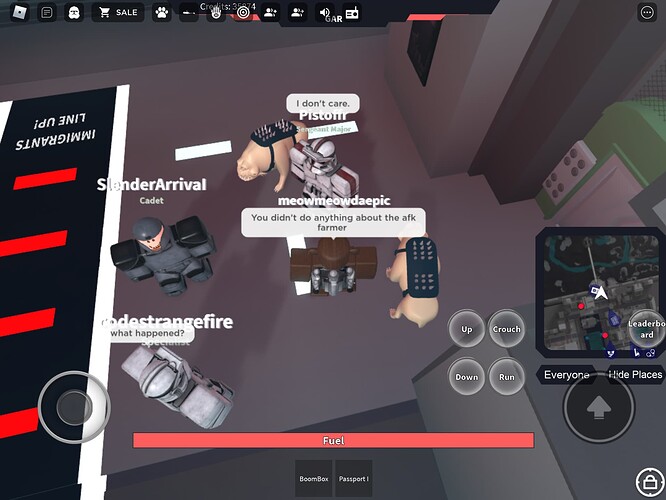 The screenshot show him not showing any care towards the fact he was allowing afk farming. I have a screenshot of him afk farming but since I just made an account to report this I cannot put both

Report denied. You need 2 screenshots with at least 10 minutes between both in order for me to take proper actions.