[CLOSED] 3 members of GAR being homophobic

Being homophobic. Unicorn was doing it the most, for more then a half hour, but I recorded only a little bit of it. I have more proof, just can’t upload it. 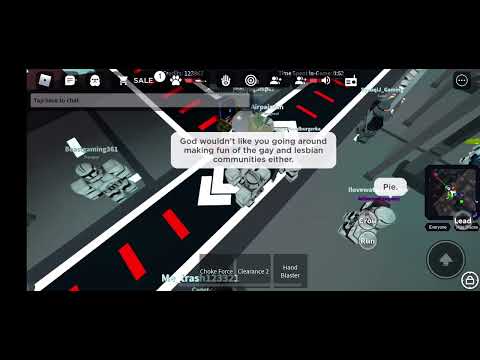 ( Attach any materials which would prove the player has abused )

Wait until this guy finds out about the other religions

That was some things I didn’t post. I still got more evidence, and they did it a LOT MORE

Maybe I didn’t get footage of buzz saying it. But he was doing it regardless, and explain unicorn and sith then

THERE STILL IS NO INCRIMINATING PROOF YOU FOOL! e

Kid is a 5 year old, he is just saying he doesn’t believe in it.

He can believe what he wants, as long as he isn’t harassing others with his beliefs and discriminating then leave him be.

He is probably too young to form an opinion, so he is just repeating what his parents said, bullying him about it won’t help change his mind.

It’s funny to watch how the kids started discussing politics in roblox. Okay, I leave a link just in case, you can find something there, but this is what he violated this “Hate speech”.

At Roblox, we’re building the metaverse: a space for people to adventure, experience, and explore. We’re a global community on this journey together, and we want to ensure everyone feels welcome an...

After closely reviewing all the proof provided, I have decided that no user will be punished for this situation. If you do not like the way these individuals are communicating within Coruscant, you may block them or utilize the Roblox report feature.