I just wanna make things clear here. He doesn’t cheat, he is just good at the game. It’s just something a skill issue you have. bosspapaboss keeps getting accused of cheating. bosspapaboss is like the best raider out of every raider in coruscant.

I didn’t think he cheated anyway

boss papa is boss no cheat

Boss papa boss is the best raider in the galaxy and he will not be taken down by any feeble butt hurt gar or raiders. Pity on you if you think boss is a cheater.

He may be good, but you can’t deny he isn’t a cheater because there’s solid evidence here that he’s a dx9er but that doesn’t mean he should get banned either because theres no evidence of him on coruscant cheating

That feels like a bit of a stretch lol

Hm, Like i said its for testing purposes on anti-cheats I make for games that I script. Not because I am in a discord server that I am a cheater. But, i suggest you to remove this comment and not spread false things about people without solid proofs, like some I do have on you.

Ok, 7 alt’s? I will say 4 in fact, and they where banned not for hacking but for using alt’s on a perm ban. Oh and yes, got unbanned cause yes, was false ban.

nice try but you cut it out smart one

So u admit to ban evading 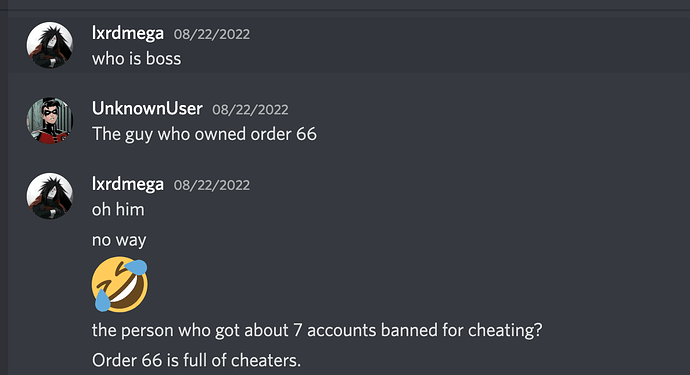 His wifi was bad at that time

Hope you will grow up soon…

Did you actually know that offkiller was first , one of the most corrupted officer that got banned from GAR? Hm and that video well, yes game was lagging,and people with more knoweldge then you have seen things you canot see lolll…and I don’t know why i am loosing my time to answer you after all…But its funny when people that are getting mad of gettin clapped by me try to accuse me of all kind of stuff like you but hey, hope to see you soon in game and kick the hell out of you again. You are my favorite one to kos, so funny to see you get mad like you do all the time hehehe

Well noob, you stated it yourslef that you are a cheater, not me… you should be mad at yourself lolllll