Black market in the underworld

Black market in the underworld

I wanted to offer you this idea of ​​a black market where you can haggle with such forbidden things as well as legal goods.
The black market, also called the underground market, was an illegal underworld center where goods not publicly sold or traded could be found and purchased. Virtually every planet had a black market of some kind.Many forbidden droids, weapons, and other technological innovations could be found on the black market.

F (Fee) - A special fee or permit was usually required to purchase these items. The fee ran from 5 to 50 percent of cost of the item and averaged at 10 percent. Records of these transactions are still kept to keep track of who owns such items. The black market would prevent the names of the purchasers from getting into such records. This was helpful for acquiring items that would go to the rebellion, bandits. In addition to the above mentioned, armor and hunting blasters were included with this group, but required a fee and permit
R (Restricted) - These items could only be accessible with a local or republic license, involving a background check and high fee (100 percent of the item’s cost or higher). The background check and fees could be avoided with the black market. Items included most combat weapons, blaster pistols, blaster carbines, ship-mounted weapons, and grenades.
X (Illegal) - Possession may have violated local law, republic law, or both. These items would only be available through the black market. Items included thermal detonators, clone and katarn armor, and anti-republic holos.
Certain goods that were normally not mass produced and not available on sale, such as lightsabers, could end up being sold and bought on the black market.
Goods did not necessarily have to be illegal or restricted to be sold on the black market, as some vendors would try to avoid taxes or notifying authorities. 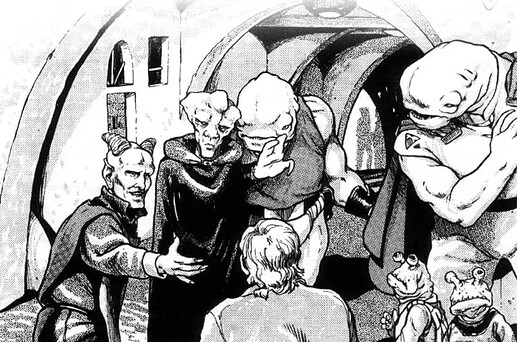 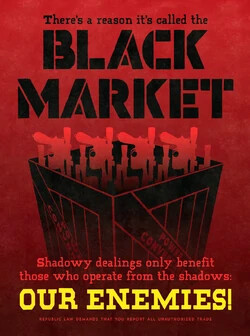 A black market was an illegal means of dealing goods and services, outside of the eyes of the government. Despite the best efforts of law enforcement agencies and clone interdiction forces, black markets prospered throughout the Clone Wars-era Galactic Republic. To counter the appeal of black markets, the government issued propaganda pieces such as “Black Market” stating that helping oneself in that way was helping the enemy, and hurting the war effort.

image1920×915 128 KB
Stuff for immigrants and everyone in the new map
Criminal Syndicate and Criminal Occupations
Discussion suggestion
NotRipCharles July 4, 2022, 8:15am #2

cool but no one replied

And when you suggest to add baddies you need the underworld police too.

I did as you asked, I will attach the link.

Underworld Police Coruscant underworld police were police officers of the Coruscant Security Force who were responsible for patrolling the lower levels of the Galactic Republic capital planet Coruscant. Underworld cops were notoriously hardened and burly in comparison with the sleek GU-series Guardian police droids that maintained law and order in the upper reaches of Galactic City. The underworld police were also known for their heavy leather and metal armor with mechanical eye coverings, whic…

Ask and you shall receive
Thank you.