Addition of a droideka as a class

Droideka would be a fine addition to the game, as it was mostly known for beeing painfull enemy of the clones. It could have a special ability from the show clone wars it self (forcefield) as well as ability to roll like in the show and maybe a dual blasters. 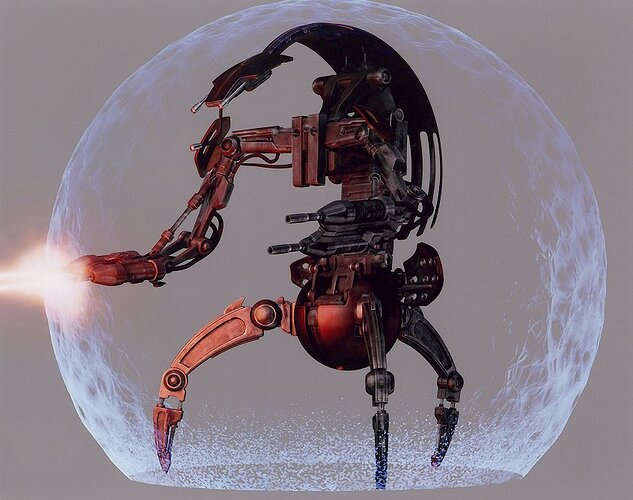 no, this would be OP

Actually this is good. It could finally be something that that would allow raiders to be a some what equal to divisonals with force fields. They could hold control and that would roll, but it would be like lightsaber dashes and stuff. I have some questions, and a couple of suggestions, great job though.

Max think about it. This could finally be something that can balance out the power between divisonals and gar and raiders.

If the firepower of this damn droid is not slightly powerful as explosive, then this is fine. A emp grenade should be added to counter droidekas and disable shield.

This is fine if it isn’t utterly OP.

You realize how many divisionals have force fields? As for being harder to hit, skill issue.

It’d add variety, which is something we kind of need. With that claim, you can say “shields on divisional are useless” which by the amount of complaints from raiders we know not to be true. The shield would also provide a damage buffer. It doesn’t have to save your life, but a delayed death is still a buff.

That’s the entire point of droideka. They were op.

It could be balanced tho? Make rolling just like dashing with lightsabers but slightly better. Dual blasters could just be blasters with double ammo.

Let me change your mind. Think about how many divisions have sheilds. Dashing would be somewhat similar to dashing with sabers.

The whole idea proposed to this subdivision seem already making other classes inferior, and the devs want to be balanced. Plus not all shield companies are very active, and even so, it still possible for you raiders to dip them out, unless you got a “stroke aim”. And secondly, the gamepass users are quite common now in gar and raiders, so i dont see how droideka can raid when being most target with shield and then killled them with multiple gold minigun.