( I was thinking of the devs adding 422nd Siege Battalion AKA Commander Dooms Unit. The first picture would be the trooper morph, the second picture of the BARC lookin guy would be Horn Company. The third picture would be The green berets The scrim/combat conpany of 422nd and the last picture is chaos company. Now for the side characters of the division. Captain Charger, Commander Manhattan and, Captain Nuke. This might not happen but if it does it would be amazing. I think RO would be Trooper, Iron Battalion/Platoon, Chaos Company and, Green Berets. I know the edit is bad.) 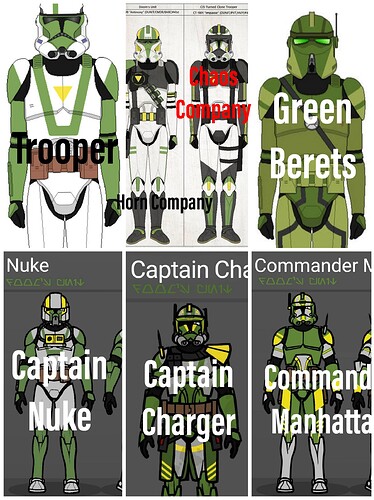 Also more named characters could be added like Commander Holt or Captain Lock and maybe even an ARC morph.
Lock would be the medic holt would be in the middle and the ARC is on the left. 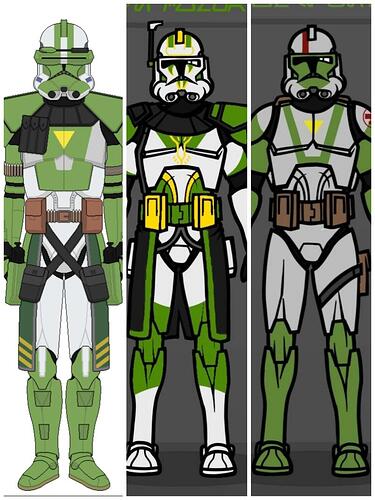 But… gar doesn’t have air vehicles. So, why do you have captain nuke? He is a pilot. He is wearing the phase 2 pilot uniform.

We don’t need this. I don’t say it’s one of the major divisions, and I don’t think it needs it.

I like this idea but it took GAR over a year to make BARC. They need to focus on the current update

We got 2 on the way, Senate guard and 21st Nova Corps.

That is no where near the amount other games have. This game would feel better and complete with more divisions to where it could feel like an actual GAR. I don’t like TCAR but they do a better job with divisions.

said this already on another suggestion regarding a division

divisions will be added as time passes by, and the senate is already a wip, so at the moment, i see no reason to have another division that most likely will just be a copy paste of the divisions that already exist

We have a plentiful amount of divisions, for a new division they’d need;

Which is a lot of work to put in for a brand new division.

No division is needed, the community is happy with the current and future amount we have. It may happen in the future but probably when we reach a LARGE milestone.